#IAmHHS: After a Stroke, I Transformed Myself

Deb Cotter is an Independent Living Program Specialist at ACL. She is one of more than 79,000 people who make HHS run every day.

I grew up in Maine as the quiet type. I came to Washington to work on Capitol Hill for then-Sen. George Mitchell of Maine. But as a seemingly healthy 24-year-old in 1992, I had a stroke due to a birth defect, which, among other things, partially paralyzed my left side.  It was not the life I had envisioned.

Despite physical therapy, getting “back to normal” was impossible, and so I hit the restart button.  I had to find a new normal.  Part of that was to put others at ease with my disability.

Rather than searching for the holy grail, a cure for my paralysis, I realized that I had to transform. I became more outgoing—because people are always going to ask you what is wrong with you.  I find that if I put others at ease with my disability it’s easier to get what I need. I went to work for a variety of nonprofits, and later government programs, that support people with disabilities. I finally emerged as more self-directed, the CEO of my own life.

A major turning point in my life came in 2014, when I performed in a talent show for the Combined Federal Campaign, the federal government’s workplace charitable giving campaign. My standup comedy routine poked fun at my own condition, in a way the audience could understand.  People loved it! And I got the comedy bug.  Now I take comedy classes, and perform at open mic nights.

I live on my own now and I’m proud to empower others to do the same. 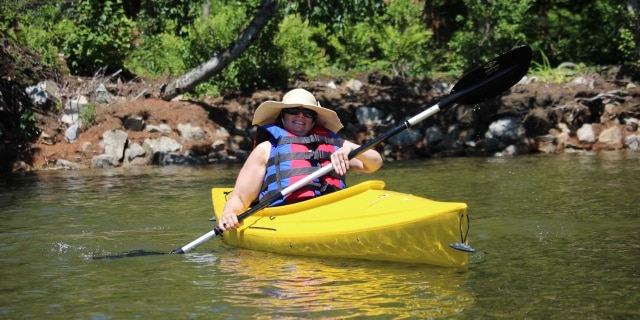 Despite physical therapy, Deb discovered that getting “back to normal” was impossible, so she hit the restart button.

I started with the Independent Living Program in 2009 when it was at the Department of Education and I stayed with the newly created Independent Living Administration (ILA) when the Workforce Innovation and Opportunity Act transferred the program in 2014 to the Administration for Community Living (ACL) at the Department of Health and Human Services. I now manage grants at ILA.

I administer 87 Independent Living grants in eight states. These grants to state and local governments and nonprofit organizations help provide information, tools, resources and supports to help people with disabilities live fully integrated in their communities and to promote equal opportunities, self-determination and respect. The Independent Living programs are critical to helping people avoid or leave, costly institutions, which often are paid for by Medicaid.

The programs also empower people with disabilities to be actively in charge of their lives. They help people find their new normal and live their lives without being dependent on anyone except themselves.

I recently suffered from gallstones and ended up having my gallbladder removed at Sibley Hospital, whose staff participated in a training program on person-centered planning led by the D.C. No Wrong Door System. These programs are funded and supported by ACL to help service providers improve their processes to ensure that people receiving care or services are in the driver’s seat for decisions. With their person-centered system, I could be my own advocate and know everything that was going on with my procedure.

This was a very welcome contrast to my experience when I had my stroke in 1992. Then I was left out of the loop, and the doctors ignored me or only talked to my parents. This time I was at the center of everything and knew what to expect. I could have done without the pain, but I was pleased to have the opportunity to see how ACL funding works in practice through Sibley’s programs.

Administration for Community Living grantees make an invaluable contribution to society, helping people with disabilities make their own choices and live independently in their communities with the people they choose. I am proud to be a part of this mission.

I’m Deb Cotter and I am HHS.

Deb is one of more than 79,000 people who make HHS run every day. You can share her story and see others on Twitter and Facebook using #IAmHHS.

Amid Criticisms, Cornyn Reiterates Support for FBI and DOJ